Well today (12/29/08) was the 1st Annual Bob Hazen's Birthday Ladera Ranch 5k Run. (1st ABHBLR 5k R for short.) I've been prepping for this race since Thanksgiving and it marked the year end for races for me. I hadn't heard and pre-race humm on the Internet regarding this race, and didn't even know that 90% of the registration fee was going towards Bob Hazen's kids college fund until I got to the starting line. (Now I've heard of this fund, but have never participated or given towards it before. Note to self - remember next year this is a taxable charity.)


The race was originally scheduled for a 6:00 pm start on a Monday (That's the date when Bob Hazen's Birthday fell on this year.) But due to a major blackout in the area causing the race organizers to come home early from work the race was moved up to 3:30! That really didn't give me much time to prepare mentally. I was shooting for a PR today and being rushed to the start didn't help.


Luckily, the race start was very close to my home and I was able to warm up by running the .44 miles to the start. The course itself was the same course that I had run for my 4th of July race earlier this year (36:27) the only difference was that the Start/Finish line was at the 1st mile marker. This is better anyway because since the course is a loop with lowest part of the course was at the finish - good for making up some time in the final mile.

Imagine my surprise when I got to the starting line - no banner, no MC, no starting line, NOTHING! The race organizers weren't even there! Well I guess I wasn't going to have to pay the last registration fee...... Stashing my waterbottle in the 'Y' of a nearby tree, I made my way to the starting line. 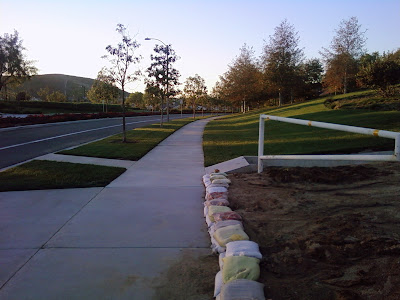 Promptly at 3:30 the non-existent gun sounded and I shot off the line without having to worry too much about chip time versus gun time. (Or other runners for that matter.) Right off I felt pretty good. Legs felt strong and even my feet were saying 'Let's GO!' But still I wanted to take the first mile kind of slow and get into a groove. The sub 30:30 was on my mind and I had planned to run the first mile in about 10:30. Most of this mile was uphill and I knew if I could clock a 10:30 mile I'd be in good shape on the backside. Still since I have been doing the majority of my running after 8:00 pm everyday I was surprised to feel my strength slowly ebb due to the 75 degree weather. But the time I hit the corner before the 'major' hill I was looking forward to this first water station. When I finally turned the corner and looked up the hill - nothing! No water station, no mile marker just nothing. 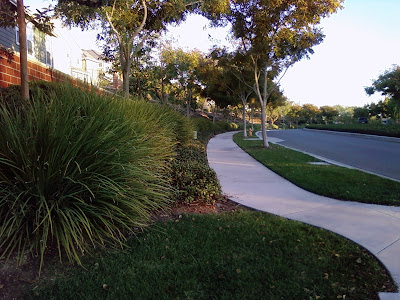 At the top of the hill, Mile 1 Marker - What happened to the water station?

As I powered up the hill and crossed where the mile marker SHOULD have been, I looked over to my left and WHAT?!? A bandit was running! He must have jumped into the fray sometime just after the start. Man was he quiet. And didn't really speak much. Over the next half mile he just kept pace with me, stride for stride and damm he wasn't even huffing! Finally as we turned the next corner he just up and vanished! Gone, poof! Where did he go? Oh well I didn't like running along side him anyway, he wasn't talkative at all. In fact now that I think about it, he was quite a SHADY character and dammit I can't even remember what his face looked like. 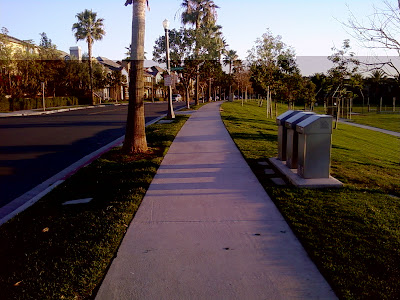 At I approached the next mile marker (or where one should have been) I glanced down at my watch: 10:15 mile putting me at 20:58. Slightly off my planned time, but still with the final mile almost all downhill a sub 30:30 was still possible, I'd just have to start booking. Cranking is up a notch, my legs started to burn with the extra effort. 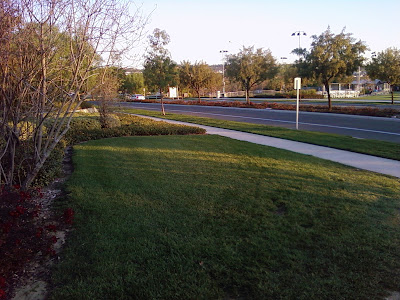 The Finish - Once again I'm all alone. Damm I hate finishing last (or was that first? Where was that bandit? I got to go kick his a$$).

As I approached the Start/Finish line I still could get over the large crowd that had formed at the start. (Yeah right) Maybe it the the change in time that held the crowds back, or the fact that the funds collected for the event were going to Bob's kids. I don't know, I almost forgot to stop my watch at the finish - thank God I did since there wasn't any chip timing. (30:45) Damm and the mile 3 marker logged a 9:03 mile. Way to pick up the pace.

Overall the race was fun even if there wasn't all the 'trimmings' you find in a normal race. Too bad I missed my target by a lousy :15 seconds. I'll blame it on the bandit... Yeah that's the ticket. Maybe next year I can get my son to run with me at least his race entry fee would go towards his education. But then again maybe not, I kind of like finishing first overall.

okay it took me a while to realize that you probably set this up yourself. At the beginning I was all "that's not a great starting line, what kid of a race is this". Congrats on your time...so close! Don't you hate that? Next time, next time!

I was hoping someone would 'get' the joke. Thanks for reading!