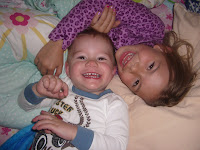 This week has been good for me. In terms of running I set several PR in training, and the family life is going well also.

Here's a quick summary:
Miles Run this Month (so far) : 46.22 (3rd highest in past 12 months)
Total Miles for week ending 10/25/08 : 22.14 (2nd longest distance in the past 16 weeks)
Avg Pace (running only) : 10:06
Best Pace (running only) : 9:14 (does not include splits)
PR's:
1. Currently on an 8-day consecutive running streak.
2. Ran a 30:50 5k training run on 10/25/08. Was pulled along by Alex through pretty much the whole course. Note: this is the exact same course I'll be running on Thanksgiving where my race goal is a sub 33 min 5k.
Other notes of interest: I'm now averaging 1.71 miles per outing , whereas last month it was 1.55. This number includes my lunch/family walks so it's nice seeing that slowly creep upwards in addition to my mile time slowly creeping downwards. I'll have to make sure I don't overdo it over the next four weeks though so I don't burn myself out. Another note of interest is that in addition to the consecutive 8-day running streak I'm on is that I've now run 17 of the 25 days in the month! Can I continue this? I should be able to until at least Thanksgiving.
Talking about this, I'm going to have to find another run after Thanksgiving to set my sights on. I don't want to fall into a trap of just shooting for Thanksgiving and not continue on after that date. There is another 5k run I'm eyeballing for mid December but it's a trail run and I've never done a racing trail run before. So I'm wary of that (I really don't want to be outclassed). But then again it's in North Laguna above Crystal Cove which is one of my favorite places. Last year's winner for my age group was 29:49! So I know it's a tough course. Maybe I can get out and try running it before Thanksgiving. 28:45 won the whole thing.
As for my Thanksgiving run, I'm keeping my sub 33 min goal because I still feel that's a good time to shoot for. I'll be running with Eddie (a friend) who pulled me around the 4th of July run in Ladera Ranch this past year. Our time wasn't very good but he stayed with me while I struggled. This time around I think I'm in better shape than he is so I'll do the same for him. You never know though with Eddie - he's an x-marine so he could just kick my ass also. (I do know he's really not running right now, nor has he given me any training times.) I'm planning on taking the camera this year to try to get some shots so I can post them here.
Finally, Alex challanged me to a weight loss contest - if I get down to 180 lbs by our Hawaii trip in mid Feb 2009 he'll shave his head. Currently I'm at 213 lbs and I KNOW he's doesn't even dream I can get close. That will be a good goal for me to try to achieve. Now I really don't want him to shave his head, but I would like him to cut it so I can see his eyes......
Keep Steppin'
Bob
Posted by Bob Hazen at 7:32 AM