So here he is - the newest member of our family, Bogey. After Beth searching long and hard she found him at a rescue shelter very close to our home. In fact the shelter and animal hospital is run by a former High School friend of mine. I have to tell you he runs a top class center, I couldn't be more impressed. You can check out the center here. There's more pictures of him and some of his brother's and sister's known as the St. Patties pups here.

Bogey's mother was rescued from up in Northern California, she was pregnant and abandoned with a litter of 14 pups. Bogey is the runt of the group. Half black lab and half who-knows-what, he's a typical 11-week old puppy. 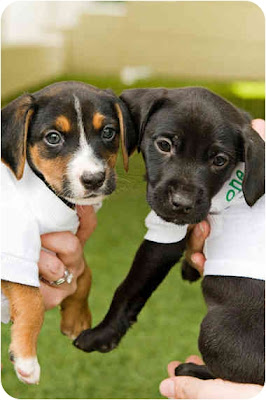 Over the past few days - I've been slowly training him on the leash and he's taken to it very quickly. So quickly in fact yesterday we actually ran a little together. Bogey's mile times: 24:02 on 3/30, and 19:00 flat 3/31. Not bad for such a small little guy.

The doctor's have estimated that full grown he could be anywhere from 40-80 lbs depending on what breed the father was. I see a lot of beagle in him so I'm thinking he'll be on the smaller end, but I could be wrong.

Getting back to training him - I was worried about him being male with marking but he's doing rather well as long as we keep on top of him making sure he's got access to the outside. We are crate training him, and if you're not familiar with that please watch this video. But overall he a very mild puppy and well mannered.

As for running with him - currently I'm just having him walk with me over my cool down mile, I'll do this for a few weeks 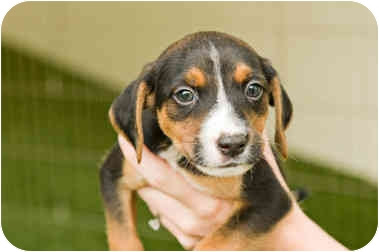 and then add the warm up mile. Eventually I'll move him into my main run then drop the warm up and cool down miles - and we'll see what we'll do from there. But this is already looking out about 4 months so saying anything beyond that is not really worth trying to plan out. (I have a hard enough problem with MY schedule.)

He is ADORABLE, what a great addition, glad you got him :) He will love running with you!

5 minutes off of his mile time? Gosh, if I could do half of that I could qualify for boston!