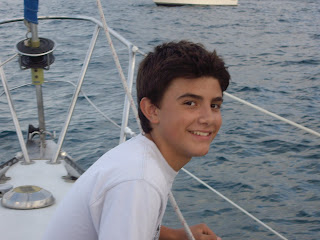 I didn't get a run in this weekend at all - I spent time with the family, and just never got out. Saturday Beth and I went out to dinner for her Birthday. It was nice getting out by ourselves without the kids (Mas and Papa watched them overnight.) We went to a great place in San Clemente (El Mariachi) and had just a little too much to drink. There was a nice couple next to us out on the patio who kept eyeballing out margaritas and finally asked what out bill was (they were $16 each!) A little more than what we'd normally spend, but it was good for us to get out.

Saturday morning/noon we spend at Abby's soccer game. I don't know if I've mentioned this but I've been coaching her for about 4 years now. They played really good, but fell apart in the final 5 mins of the game. After missing several chances to score early on they gave up three goals in a 5 min span and lost 3-0. Much better than the 9-0 skunking from last week. Even with the loss, I was pleased with the girls effort and they played much better this week. For practice this week we'll work on scoring more.

Sunday was spent cleaning, picking up the kids at the Grandparents and then watching my Chargers blow a game. I can't remember such poor play calling from the coaching staff in the past 10 years. I really hope they fix that problem.

Running this morning was great. After walking the girls to school, Cade and I went for a short run. I originally wanted to get in about 2 miles, but once we started I changed the course a little and it turned out to be 3 miles once we were finished. Pace was roughly :30 seconds faster per mile than we have been running so I was pleased with the effort. The only issue I had today was my feet. Both were cramping up a little, so I'm thinking I needed to stretch them out a little before my run. I'll keep an eye on this because my shoes are getting up there in miles (260 miles). I'm hoping to get closer to 500 mile though, but this is the first time I'm running with Brooks so I'm going to monitor this closely.

The chargers really did struggle. I still think that they are the team to beat. (don't even get me STARTED on the chiefs.....)

Oh man you're a Chiefs fan? I'm sooooo sorry. I have a good HS buddy of mine who's a Chief's fan also. Needless to say we haven't watched football together for about 8 years just because we're in the same division......

Another 'person' (I can't call him a friend besause of his team) is a Raiders fan. I hate it when the Chargers lose - Beth and I get either a voice mail or a text. It's so bad that he resorted to the Charges losing becasue his team never wins anymore. :)