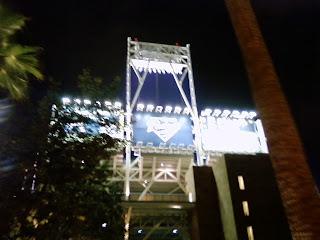 I've got to admit San Diego has a great stadium. Unfortunately, their team is really bad....

I got the company tickets to Wednesday night's game, which I almost didn't take because I go into the office at 4 am - and I know that I wouldn't be home until about midnight but because of all the political stuff in the office right now I figured to take advantage of this offer and I've always wanted to see the 'new' stadium in San Diego.

Armed with four tickets on a school night, we left the kids with my sister (she spent the night) and had Beth's parents join us since they are HUGE Padres fans. The extra bonus was my father-in-law drove so I was able to rest a little.

The Stadium is beautiful - with a nice and intimate feel to it. It help being on the field level seven rows up off first base though! The seats were perfect, so I had to take some pictures with my crappy cell phone........ 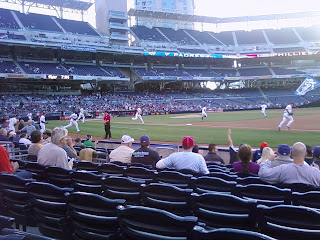 It's nice being on the field.

Supposedly there were 15k in the stadium - I'm guessing only 10k were actually there though. 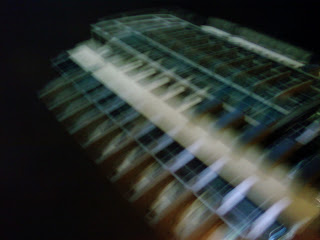 Downtown building - by the stadium - Yeah I was walking....

On the running front - I'm still taking the week off. My legs are feeling better, but overall I'm still feeling worn down. Starting Monday I'm planning to pick it up again and really push myself over a four week cycle finishing with my race on the 4th. 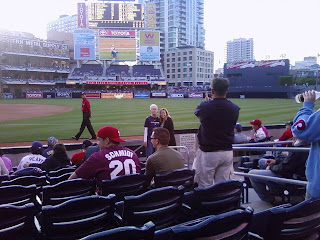 Beth with her Mother

Too bad about the 100 mile month. July! That way you can claim that it was in the miserable heat too.

That stadium looked about as full as the braves stadium last night. Too bad, it was a good time.